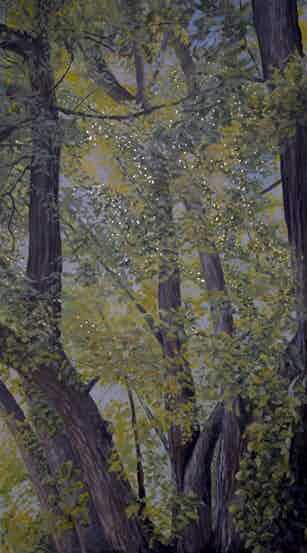 Originally from Rochester, New York, Sabra L. Crockett has lived in numerous locations throughout the south before finding her home in Louisville, Kentucky. There she enjoys being surrounded by beautiful songbirds and a spectacular variety of trees.

“I am fascinated by nature. It has a secret language that I try to decipher. There is a feeling I get when observing the birds, animals, and trees - a feeling that I am experiencing something that is so familiar, and yet so extraordinary,” she states. “I have been visiting one of the largest and oldest Ginko trees in Louisville for many years now and the painting in this exhibit is the first in a series about this tree.”

As a grandmaster international sand sculptor, Damon Farmer is also a painter and muralist. His career includes major public art projects as well as theater work and animation. Farmer’s three works in this exhibit are small compared to his 20-30 food wide commissioned paintings.

Originally from Berea, Farmer’s works are infused with a kind of magic that often reflects and questions contemporary culture. His paintings make the viewer stop and think, and tend to be visions of whimsical fantasy.

“Imagined things are my favorite painting subjects and science fiction themes have the compelling appeal of being unbound by a need to match reality. It is more fun for me to design than to copy,” says Farmer.

Felipe Molina was born in Queens, New York City and now lives and works in Lexington, KY. Molina studied at the Art Students League and at the New York Printmaking Workshop. His work has been featured on the album covers of the band, Counting Crows, with eleven original works published in a new book of song lyrics for the popular rock band.

Molina’s work explores human relationships with the environment, and his landscapes have detail, surface and hidden meaning. His oil paintings are reminiscent of Pre-Colombian primitivism and modern Latin American masters. His imagery delves into philosophical ideas and the psychological connections between humans and animals. He works in oil on canvas and often incorporates sand, acrylic paint for texture and marble dust to the surfaces.

A native of Louisville, KY, Robbie Mueller has lived in Oldham County since college. After 28 years as an elementary and middle school teacher, he now focuses on mixed-media art. As a mostly self-taught artist, Mueller works primarily on a large scale with wood, paper, found objects and acrylic paint.

“For me the creative process begins as I observe the things around me. I am naturally drawn to items that show their age and have an obvious history,” says Mueller. “Old found objects evoke a memory and I begin to visualize a story. It becomes the inspiration and influence for the artist inside me.”

Mueller says that his work “Makin’ Jar Lights” was inspired by observing his youngest granddaughter scampering around the yard capturing lightning bugs in a jar. The simple act of making “jar lights” seems to be a universal phenomenon that links shared memories.

The Kentucky Artisan Center features works by more than 800 artisans from more than 100 counties across the Commonwealth. Special exhibits currently on display include The Great Kentucky Cover-Up: Quilts from March 23 – May 6, 2019. For more information about events call 859-985-5448, go to the center’s website or visit us on Facebook.

The Kentucky Artisan Center at Berea is located at 200 Artisan Way, just off Interstate 75 at Berea Exit 77. The center’s exhibits, shopping and travel information areas are open daily from 9 a.m. to 6 p.m., and the cafe is open from 9:00 a.m. to 4:00 p.m. Admission is free.