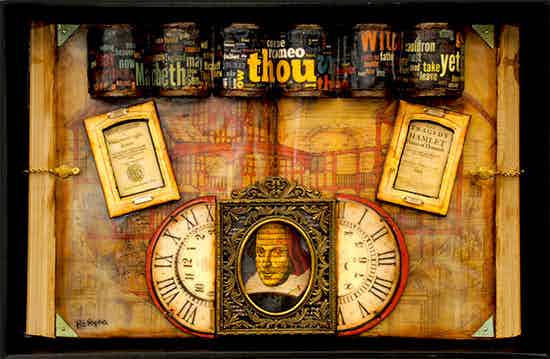 The Kentucky Artisan Center announces a new exhibit of works by Versailles artist Ray Papka. This exhibit showcases 19 colorful and intriguing mixed media works that spring from a central idea into a juxtaposition of color, found materials, techniques and formats.

Papka’s works are formed by his childhood and by 30 years as a Ph.D and educator in the field of brain and nerve sciences. Born and raised in Wyoming, with a childhood that rivaled Tom Sawyer, Papka learned early on to be self-reliant and independent. From an early age, he was drawn to books, maps, and relics from the past.

“Books allowed my mind to travel everywhere,” Papka states, “they connect knowledge and history and I love to recycle them in my work.”

Papka studied Zoology and Chemistry as an undergrad and with a scholarship to Tulane, earned his Ph.D. in anatomy and neuroscience. After 10 years teaching at the University of Kentucky, Papka traveled to Australia on a sabbatical before teaching at the University of Oklahoma for ten years. His last teaching position saw him as head of neuroscience and Vice-President of research at Northeast Ohio University College of Medicine. His expertise and research in nerve studies resulted in consultant work in Denmark and Hungary.

Papka moved back to Kentucky to be near his three daughters. He jokes that most people know him as the father of Ouita Michel, Perry Papka and Paige Walker. Papka has settled into creating his artwork full-time. In his basement studio outside of Midway, his collection of books, objects, gadgets and paper offer an astonishing collection that form the essential parts of his mixed media works.

Using an age-old technique called Encaustic painting, Papka layers melted beeswax mixed with natural resins and colored of pigments onto his rigid wood panel surfaces. The word “encaustic” comes from the Greek meaning “to heat” or “to burn in” or “fuse.” This medium is archival and it gives a sense of depth to a surface, reflecting light, and offering a sensuous appearance.

“Doing artwork is kind of like doing lab work to me – because in my scientific career I’d set up a hypotheses and go into the lab and do the research to test it,” Papka states. “Now in my artwork, I set up a title first, and I go into the studio and work – and that piece becomes an experiment because the story is coming out of me as I am working. So I’m doing the same thing,” Papka reasons, “using the same neurological pathways in my brain.”

While Papka’s scientific background and intellectual process direct his art, he often uses old books to form the structure of his mixed media works. In the piece, “Book Totem II” an illustration of a vaulted library is seen between two rows of the spines of actual books on a shelf built out from surface. The lower half includes printed text, a niche with typewriter keys and overlays in wax of color, writing and punctuation marks. The work expresses Papka’s love of books, text, printing, fonts and papers used in printing, as well as the history of print and books.

Works in this exhibit reflect a variety of subjects and ideas, often initiated by an object found at a flea market. Finding sheet music to “Fanfare for the Common Man,” a composition by composer Aaron Copland, was the genesis of two works titled “Fanfare I and II. Fan shaped brass parts from a fire screen represent the brass orchestra and are encased within the lid and bottom of an old violin case. Sheets of music line the violin case and even the end of an actual brass horn is included.

The work “Shakespeare” includes a portrait of the bard, miniature versions of his plays, all secured within the confines of an actual open book. “Leonardo’s Journal” is another in a series Papka has created to honor great thinkers.

Of special interest are two works that are composed of multiple pieces aligned together. “Remnants” includes nine sections, each speaking to remnants of different things such as numbers, dreams, navigation, games, time, travel, and music.

The work “Synthesis” includes 10 sections in a composition of red, white and black that juxtapose a variety of objects and images placed together to create a fascinating and beautiful composition.

This exhibit will be on display at the Kentucky Artisan Center from May 5 – October 31, 2018. All works are for sale.

The Kentucky Artisan Center features works by more than 750 artisans from more than 100 counties across the Commonwealth. For more information about events call 859-985-5448, go to the center’s website or visit us on Facebook.

The Kentucky Artisan Center is located at 200 Artisan Way, just off Interstate 75 at Berea Exit 77. The center’s exhibits, shopping and travel information areas are open daily from 9 a.m. to 6 p.m., and the Artisan Cafe & Grill is open from 9 a.m. to 4 p.m. Admission is free.